Book Online:
Our History
The great ranches of the Old West are time capsules of the American frontier, where one can hear tales of gunfighters and desperadoes, wranglers and cowpokes, and cattle drives of a thousand miles up the dusty Chisholm and Goodnight-Loving trails to the railheads of Abilene, Dodge City and Denver. These historic ranches are the stuff of legend, and more than one classic John Ford western movie. 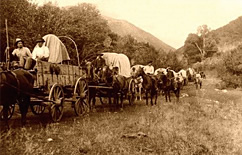 Yet right here, close to the gleaming casinos and luxury hotels of Las Vegas, is one of the great western ranches, the historic Grand Canyon Western Ranch comprises over 800 acres, and which wrote an exciting chapter of its own in the settlement of northern Arizona where part of the Mormon Trail ran through its land.

The water comes from an artisan springs called Grass Springs. The Stone Cabins date back to the 1880's built by miners who were processing gold ore. They ended their operations here when the Hualapai held their very first Ghost Dance in 1889.

The ranch was surrounded by beautiful and scenic views and the Starkey family moved into the Stone Cabin after the miners had left.

The main Ranch House was built in 1931 by Tap Duncan who acquired the Ranch from the Starkey's. It became the original headquarters of his 1.4 million acre cattle ranch then known as the Diamond Bar Ranch.

In order to acquire 1.4 million acres some folks still wonder how he came by that money. Some say honestly through hard work whilst others say from Bank and Train robberies.

Tap's wife had an uncle named Black Jack Ketchum and he and Harvey Logan (known as Kid Currie) were notorious Bank and Train robbers and associated with the Hole in the Wall Gang. Whilst Tap may have been guilty by association one thing is known for sure that Tap participated in a gun battle and killed a man in Bruneau, Idaho.

In 1956 the Ranch was bought by Dale Smith who was a World Champion Calf Roper in rodeo. At that time the ranch only operated as a cattle and horse ranch until it was purchased by the present owners predecessor in 2002 and converted to tourism whilst operating on a smaller scale as a horse and cattle ranch.

The new and present operations included helicopter rides into the Grand Canyon, horseback and wagon rides and a gun range. Buffalo were also introduced to the Ranch to revive their past and future history.

The main Ranch house was converted to a Restaurant offering breakfast, lunch and dinner and a bar, which is fully licensed, and accommodations were added.

Today the Ranch offers rustic Cabins, Glamping Tents and an overnight Camp Site for those wanting to take a horseback trail ride, sleep under the stars and enjoy a meal cooked by a real Cowboy.

All of these accommodations and activities can be found and are available to book on this website.